A few months ago, I was asked to design and carve a relief that represents the corporal works of mercy in the context of Christ's sacrifice on the cross.

The traditional corporal works of mercy are feed the hungry, give drink to the thirsty, clothe the naked, shelter the homeless, visit the sick, visit the imprisoned and bury the dead. This list finds its roots in Matthew 25:34-46.

The idea here was to surround the image of Christ on the cross with images of each corporal work of mercy as it might relate to the Passion narrative. 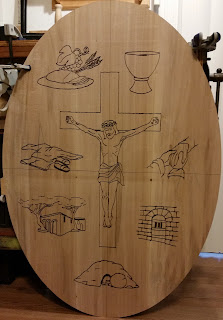 The bread for "feed the hungry" and the cup for "give drink to the thirsty" bring to mind the Lord's Supper. The seamless garment and sandals for "clothe the naked" are those that were stripped from Jesus during his crucifixion. The house depicted for "shelter the homeless" is based on images of the house in Ephesus that tradition claims is the house that John took Mary to live in after Jesus's death. The comforting hands draws inspiration from Jesus comforting the women of Jerusalem while carrying his cross. This should remind us that we can comfort not only physical illness, but anguish as well. Finally, the tomb that Jesus was buried in, prior to his resurrection.

Carving has already begun and I'll post another update soon with continuing progress.

If not found, try this blog search.