This carving depicts events and themes surrounding the annunciation narrative from the gospel of Luke. The center panel depicts the angel Gabriel appearing to Mary. On either side of this are John the Baptist proclaiming the coming of the Messiah and St. Joseph in his carpenter's shop. The far left and far right panels depict the messianic prophets Jeremiah and Isaiah.

In designing this piece, I incorporated a number of references to historical christian iconography. In the central panel, Mary is found kneeling on a prayer kneeler indicating her prayerful refection on the word. The kneeler is decorated with a lily which is a symbol of purity. Behind Mary are a pitcher and basin of water that also are used to signify purity. The angel Gabriel appears with one hand gesturing towards Mary and with his other hand he holds up two fingers indicating the human and divine nature of the child to be born. The walls of the room have cracked plaster to indicate the humble estate of Mary. 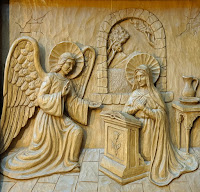 In the depiction of Joseph in his shop, Joseph is surrounded by the tools of his trade. The Holy Spirit is depicted as a dove in a cloud to convey the message Joseph received in a dream as to how Mary was found with child. Again, we have the cracked plaster on the wall.

John the Baptist is depicted standing in the waters of the Jordan river. He is wearing clothes made of camel's hair with his hand extended in a gesture of proclamation. Above him is the "Lamb of God" which he proclaims in John 1:20. The lamb is holding a banner with the Chi-Rho christogram (superimposing the first two letters in the Greek spelling of the word Christ.)

Email ThisBlogThis!Share to TwitterShare to FacebookShare to Pinterest
Labels: Carvings

If not found, try this blog search.